To advocate the agreement, between the government and it’s people, that has made the United States of America a great country, by encouraging and empowering citizens, businesses and political entities to be patriots of the United States Constitution. 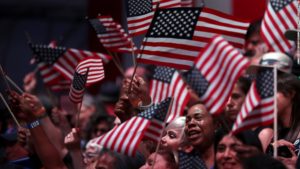 We have gotten to the point where bipartisanship, or a two party political system, has taken control of our political system. By pandering to special interest groups, both parties, the Democrats and Republicans, have strayed from the ideology set forth by our forefathers in the United States Constitution.

These parties stay strong by dividing the American people. Democrats zealously propagate the belief that Republicans are against Separation of Church and State, Freedom of Religion and Equality, while Republicans accuse Democrats of creating a Welfare State, attacking our Right to Bear Arms and the Free Market.

Most Americans are caught somewhere in the middle, trying to make sense of all the hypocrisy.

Patriots For The People is a non profit organization that believes there is already a system in place for the American people; the United States Constitution. The Constitution was written by our forefathers, having already declared independence from the tyranny of their former government. It is fair, balanced and designed to evolve around certain fundamental parameters.

Patriots For The People believes the United States Constitution is a unifying force of the American People.

Patriots For The People is a grass roots organization. We use our resources to promote education and awareness. We encourage businesses to honor, the United States Constitution and the freedom of the American people, who “vote in” a healthy economy with their hard earned dollars. We pressure politicians to fulfill the oath they swear to when they take office; to uphold the United States Constitution.

Our Vision on the Economy

Like Libertarians, we believe in the free market. Free market capitalism allows the consumer to vote, with his or her hard earned dollars, for the goods in services they deem worthy. Like a sort of “Economic Darwinism”, the goods and services that best fulfill a need, or desire, prosper. This is in contrast to Socialist, or Communist based economies, where the government decides which products and services best fulfill a need. Pragmatically, the natural, or laissez faire (leave alone), approach to the economy has proved the most successful. The capitalist based economy of the United States is what makes us the economic powerhouse and envy of the world.

Our Vision on Taxation

Like it or not, the United States is a superpower in the world. Although we have become a superpower through a strong economy, it is secured through infrastructure. The might of the United States Military keeps us safe, and backs our currency. Our public roads and highways guarantee the free flow of interstate commerce and tourism. Police and Fire Rescue keep us secure. These things cost money. This money comes from the taxes we pay.

We believe the only fair way, is a flat tax. Everybody pays the same percentage at every level of income. It is that simple.

Then, citizens can vote on which social programs are truly necessary. We believe, frivolous spending on mismanaged government programs should be kept to a minimum. Let the citizens decide which are worthy of their tax dollars. We believe most citizens will not want to give their tax money to parasites that abuse the Social Welfare System. One the main functions of Patriots For The People is to expose and shame these parasites, so that voters can make informed choices at the voting booth.

In this way, lower taxes prevail for the 90%, thereby giving more expendable income to the citizen consumer.

We feel that small business will prosper, as they continue to benefit from tax deductions and increased consumer spending.

In this system, the wealthy and poor alike, pay their fair share of taxes.

Our Vision on Borders

Although we take the Libertarian view on free market capitalism, Patriots For The People differs from them on the subject of Open Borders. We believe the United States of America is an “Emerald Greenhouse”, a gem of economic prosperity and growth. If you leave the door of the greenhouse open, it equalizes with the outside environment, potentially harming the businesses that grow within. We are sick of seeing the United States be an open cash register for the third world. Patriots For The People believes in international commerce that yields profit to the United States of America, not to crooked politicians who rationalize self serving deals as for the greater good.

Patriots For The People believes in vetting potential immigrants, allowing the best the world has to offer into our country. We are not against immigration. We want the world’s best to make their home in the United States of America. Conversely, we believe in strong border control, to keep out those whom have not been vetted.

Our Vision on Diversity

Patriots For The People believes this country thrives because of diversity. We believe in the civil rights and equality of all citizens. This is a fundamental parameter of the United States Constitution that shall not be compromised. This country was originally settled by pilgrims seeking freedom to practice their religion. This economy was built by all creeds, working towards a better way life for themselves and their families. Conversely, we are against affirmative action, or any programs that give special privilege, or reparation, to specific demographic groups. Patriots
For The People believes we should all be equal in the eyes of the law and representation. Many of our programs are geared towards propagating this fundamental cornerstone of the United Stated Constitution. Our goal is not to celebrate diversity, but instead, blind to diversity, celebrate the individual based on the merit of their own accomplishments.

“I have a dream that my four little children will one day live in a nation where they will not be judged by the color of their skin, but by the content of their character”. (Dr. Martn Luther King)

Our Vision on Church And State

Patriots For The People believes one of the fundamental parameters of the United States Constitution is Freedom of Religion. Citizens should be able to practice their religion without fear of reprisal, as long as it does not violate the rights of others. This goes hand in hand with a Separation of Church and State. Separation of Church and State guarantees that a majority cannot compel other citizens to adopt it’s religious views through government intervention. In such a system, we endeavor to avoid another Spanish Inquisition, or Holocaust. The original settlers of this land came from Europe to avoid religious persecution.

Our Vision on Abortion

Although not dealt with specifically in the United States Constitution, Patriots For The People believes that abortion should be illegal. This is not based on religious views. Instead, it is based on the definition of murder.

1. the unlawful premeditated killing of one human being by another.

We believe that human life is that which is of human origin at any stage of development.

Other than in extreme cases where a pregnancy is physically dangerous to the mother’s health, we do not condone abortion. Although this topic will not be the primary focus of our efforts, we support pro-life causes.

Our Vision on Freedom of Speech/Press

Patriots For The People believes that Freedom of Speech, along with Freedom of the Press are fundamental to the United States Constitution. One of the most fundamental rights of freedom is being able to voice one’s opinion without fear of government inquisition. Freedom of the Press gives reporting agencies the right to snoop for scoop (information). This is essential for informing citizens of the true state of affairs, so that they can make informed voting choices. Conversely, we feel that the press has a fiduciary responsibility to report the news objectively. Not doing so should make reporting agencies susceptible to loosing their press passes. Unfortunately, reporting bias is a major problem right now. We will use many of our resources to expose dishonesty and bias in the political press.

Our Vision on the Military

Patriots For The People believes that a strong military is needed to protect our borders and our interests throughout the world. It is a strong military that backs the US Dollar and provides security to citizens and our allies. However, we believe that our military should not be exploited for the special interests of other countries. Furthermore, the US Taxpayer should not be funding other countries military endeavors, unless a clear strategic advantage, or return on investment (to the Taxpayer), is derived from it.

Our Vision on the Right to Bear Arms

Patriots For The People believes the Right to Bear Arms is a right that “shall not be infringed”. Similar to the First Amendment, which guarantees free speech, the Second Amendment is a checks and balances. It is a fail stop against rising tyrannical regimes. This is essential to protecting our freedoms granted by the rest of the United States Constitution. Our forefathers decided that these freedoms are more important than the false sense of security, of an unarmed population.

Other 2nd Amendment quotes of our Founding Fathers.

Since the Second Amendment is under attack by Socialist ideologues, Patriots For The People spends significant resources educating citizens, so that they may be well informed at the voting booth.

Our Vision on the Environment

Patriots For The People believes that we should all treat the environment with great care. We feel this is important for a healthy future for our children and future generations. Being concerned with the environment is neither a Liberal, not Conservative concern. It concerns every living thing on the earth. Patriots For The People supports profit driven initiatives towards a healthier environment. Through recycling, technology and awareness, we will all benefit.

The next steps depend on you. We appreciate your support. You can donate your time, money, or both. Please help us get our articles out on Social Media. If you have a topic you would like us to explore, we would love to hear about it. Many ideas come from the Patriots For The People community. America is in our hands. The time is now. Donate Today!